A 17 year old Singaporean was recently arrested for hit and run. However, the events leading up to it is making the internet boil.

A friend of the victim’s who mom passed away after the accident writes:

“He is underage and he was driving. He hit my friends mom AND RAN AWAY. My friend’s mom passed away. His perfect family is ruined now just for that f***er’s little “fun” moment of driving. Who will guide my friend and his little sister (who is only 13 years old) in life now?

5 years of jail? 5k fine? No amount of jail time or money can repay back. He deserves a life time sentence and live his everyday life in guilt and misery. Just because he’s underage so the sentence would only be 5 years? IT IS EXACTLY BECAUSE HE IS UNDERAGE HE SHOULD FACE A LONG TIME OF PUNISHMENT. Where is the justice?

If only you at least called the ambulance and send her to the hospital immediately, auntie MIGHT be able to survive If only you didn’t lose your damn balls and ran away. Death would be too good for you, I hope you live everyday of your life in pain.”

The friend also noted that the 17 year old did not have a driving license and his irresponsible driving behaviour has costed a life.

Madam Lau was on her work that morning with her partner, a 56-year old plumber when the teenager crashed into the motorcycle they were both on. The divorcee’s boyfriend suffered from a fractured spine and even broke his right leg and ankle.

He mourns for her and asked “why didn’t take me with her?”

When reporters contacted the teenager who was responsible for the accident, his 15 year old girlfriend who was also apparently in the car with him told media that they actually they ‘didn’t flee the accident scene’.

The son of the deceased called the couple a LIAR and asked if they did not flee the scene then why were they not present when police officers showed up?

“She claimed they didn’t flee the accident scene.

And that they had left only because “someone had already called an ambulance”, and he wanted to accompany her home, as she was unwell.” TNP reports.

“(He) actually got out of the car and asked the woman on the ground: ‘You okay?’ and she nodded.

As someone had already called the ambulance, (he) decided to see me home first.

We hailed a taxi and he took me home,” the girlfriend said to Shin Min Daily News.

However when the son contacted the ‘murderer’s’ girlfriend, she did not seem to have shown any signs of remorse.

In fact, someone showed that the ‘murderer’ used twitter after days after the accident and had no guilt in his tweets. 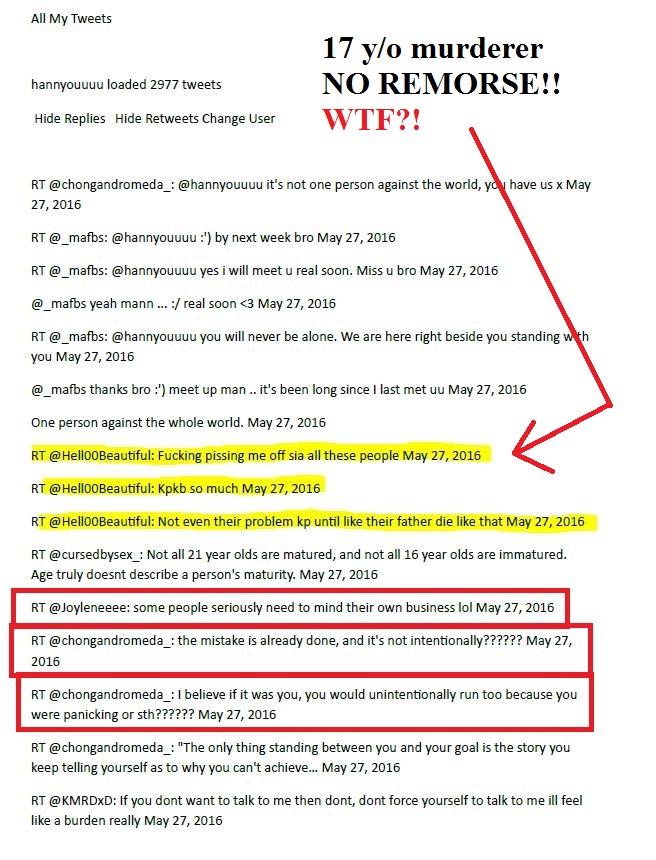 The public was riled up in anger as the teenager had the audacity to drive without a license and fleeing the accident scene. Let’s hope the two teens of the deceased mom will be okay.

The tragic accident was caught on a dashcam of a passing car which was shared on Facebook page Roads.sg.