This is Rocky and Spencer.

They were inseparable best friends who spent 10 long and happy years together. Until one day, Rocky was diagnosed with a cancerous tumour growing inside of his body.

According to The Dodo, the blonde-furred doggo had to be put down on that very day of the discovery because it was already at the end-stage. It was the only way left to end his suffering. How sad!

The dog’s owner said, “It was hard to process Rocky’s sudden death, but we can’t imagine how hard it must be for Spencer to have lost his little brother”. He added that Spencer and Rocky “have never spent a night apart”. 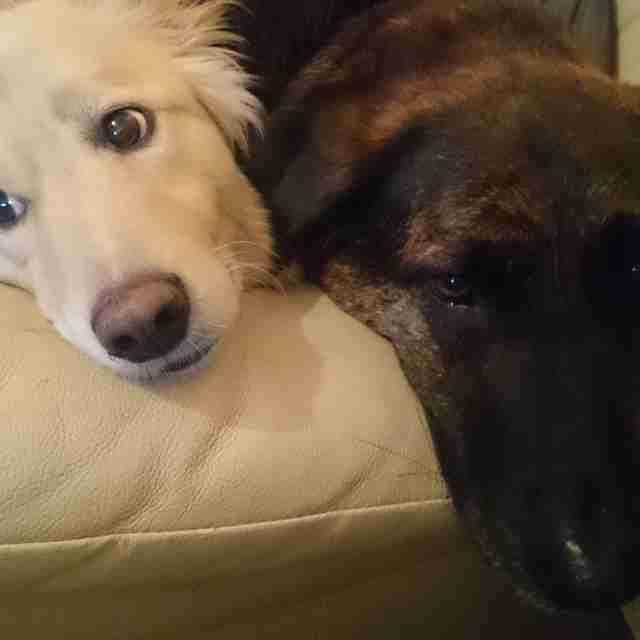 “Rocky and Spencer slept in the same bed, ate from the same bowl and always walked together when they went out.”

Spencer was heartbroken. He got up in the night to look for his brother who has passed away. In the end, he started crying when he couldn’t find him. OMG, who’s cutting onions!?

So, Fisher’s dad ordered a pillow with Rocky’s handsome face printed on it!

He hoped to put Spencer at ease, and it worked! He must’ve missed seeing his brother’s face so much.

Spencer carried his new pillow around the house, and he cuddles it all the time. His family’s heart hurts for him, and they stand by his side to heal from the loss of his best friend.

“I don’t think Spencer will ever get over Rocky’s passing, but I hope he’s able to learn to go on without him.”

It breaks our heart into pieces to see the passing of a pet who is not only loved by his humans but also his furry best friend. We hope Spencer gets better sleep by cuddling his new pillow.

Read also: This Malay Man Spends Over Half His Salary to Feed Stray Dogs And Cats