Prep your keyboard-warrior fingers, this is going to stir some pretty anarchic emotions!

Logging of our beautiful Malaysian forests are on a rise, leading to some areas being botak to prep for future developments. Of course, with excessive logging comes consequences, such as destruction of the natural habitat, disruption of the ecosystem and the lost of ancestral land of the poor Orang Asli.

According to official sources, three Orang Asli activists were recently ‘arrested’ by men impersonating police officers in their kampung several hours from Gua Musang. The activists, Mustafa Along, Manglo A/L Tegau and Salim had lodged police reports but there’s no official statement from Bukit Aman as of yet.

The identities of these men are not known as of right now, but theorists strongly believed that they may have been workers hired by the logging companies in retaliation to the barricade recently erected by the Orang Asli to prevent the loggers from further encroaching on their land. 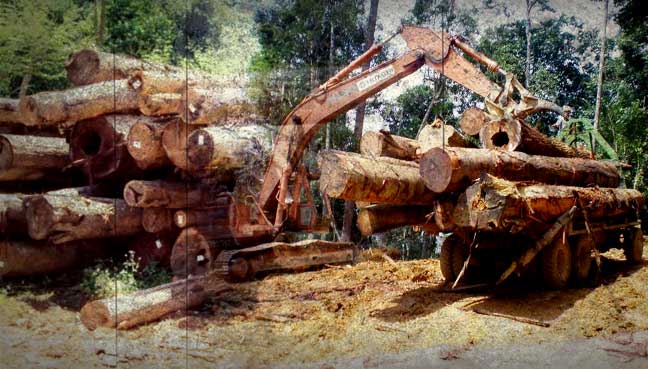 Mustafa Along happens to be secretary of the Kelantan Network of Orang Asli Villages and he confirmed that the blockade was visited by the heads of the logging companies, “police and Forestry Department officers” and “aggressive workers”.

When Mustafa began to argue with those present, men claiming to be police officers stepped forward to ‘detain’ him on grounds of provocation, blocking a thoroughfare and disturbing the peace. Mustafa asked to see some identification, but he didn’t manage to get a good look at it as it was only briefly flashed.

Image For Visualisation Only – Source: The Star

What makes this whole thing more suspicious is when Mustafa presented his arms to be handcuffed, the ‘police’ refused to do so, instead opting to  bring him and the two other men to be ‘detained’.

Later according to video provided to news medias by the Orang Asli people, the loggers proceeded to dismantle the barriers using chainsaws WHILE they were still hanging on to it.  They went and drove one of their lumber lorries through, forcing the Orang Asli to flee.

As if that wasn’t bad enough, a vehicle with two occupants pulled up to the Orang Asli, one of which had a loaded rifle! The armed man fired a warning shot, followed by another in a blatant show of force, presumably to instill fear in the activists.

But our hero activists won’t be swayed, as soon as the loggers left, the barricade was re-erected!

Siti Kasim who was part of the activist group present posted images, showing how united the Orang Asli was, to make sure that their land wouldn’t be taken and how she was later accosted by loggers ‘accusing her of “stirring the flames” with the orang asli for setting up the blockade’.

She also shared how important these Orang Asli (Mohican) are important as part of our Malaysian ethnicity.

It’s reported that the loggers are technically operating legally with logging licenses by the Kelantan Forestry Department. However, the orang asli group claimed that they had not been engaged by the authorities before the issuance of these licenses, as is stipulated in the United Nations Declaration on the Rights of Indigenous Peoples, which Malaysia is a signatory of.

Guys, we need your help to combat this! Share this article on social media and wherever you can, we cannot let fear tactics be used against a people who only want enough land so they may carry about their usual business. If we make enough noise, authorities will have no choice but to respond!