Remember how when you were 11 years old the biggest problem you had was homework and happiness was being able to eat McDonald’s while watching cartoons?

Ah, that lovely feeling of being free and the joy of being a drain on society with zero obligations. For this precocious kid, he was already busy making a name for himself in the scientific industry before he was even in his teens, unlike some of us! 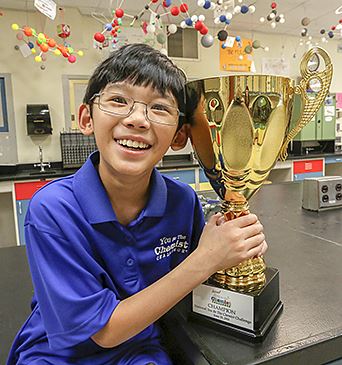 In 2015, at just age 10, he had already started high school and won the Chemical Educational Foundation’s “You Be the Chemist” challenge, beating 30,000 other contestants to take home the $10,000 (approx. RM40,650) prize and being the youngest ever to win the challenge, reported Nextshark.

Within one year, he was enrolled in classes at The University of Toledo in Ohio. He even caught the attention of Bill Nye, The Science Guy!

Daaaaaamn, Daniel! When I was 10 I was having debates on which starter Pokemon is best. (It’s obviously Charmander!)

He even went viral in 2016 for offering to help university students with their chemistry class saying if anybody had questions, they can just email him. And while the University’s Environmental Health and Radiation Safety Department forbids kids under 12 to be in the labs, Daniel was the only 11-year-old exception. With his parents’ permission, of course.

Yeah, you can almost hear the voices of your parents right now too, can’t you?

Two years later, at age 13, he co-published a research paper about developing pharmaceutical drugs and pesticides in a faster, cheaper, and more eco-friendly way. The other co-author, postdoctoral associate Mohit Kapoor, said the 13-year-old boy was a pleasure to work with. Daniel is currently a researcher at the labs of organic chemistry Assistant Professor Michael Young in 2018, at barely 14 years old.

Allegedly, he’s still a normal 14-year-old, needing to be told to clean up after himself and occasionally bugging his fellow researchers with questions. Guess some things about kids just don’t change. However, he quickly adapted to his environment and now fits in fine with his colleagues.

Stories of child prodigies are incredibly inspiring, showing us what is possible with hard work and determination.

Well, it’s never too late to start something you want to do. What childhood ambitions did you guys have? Were there any things you did as a child that really paid off when you got older? Let us know in the comments!